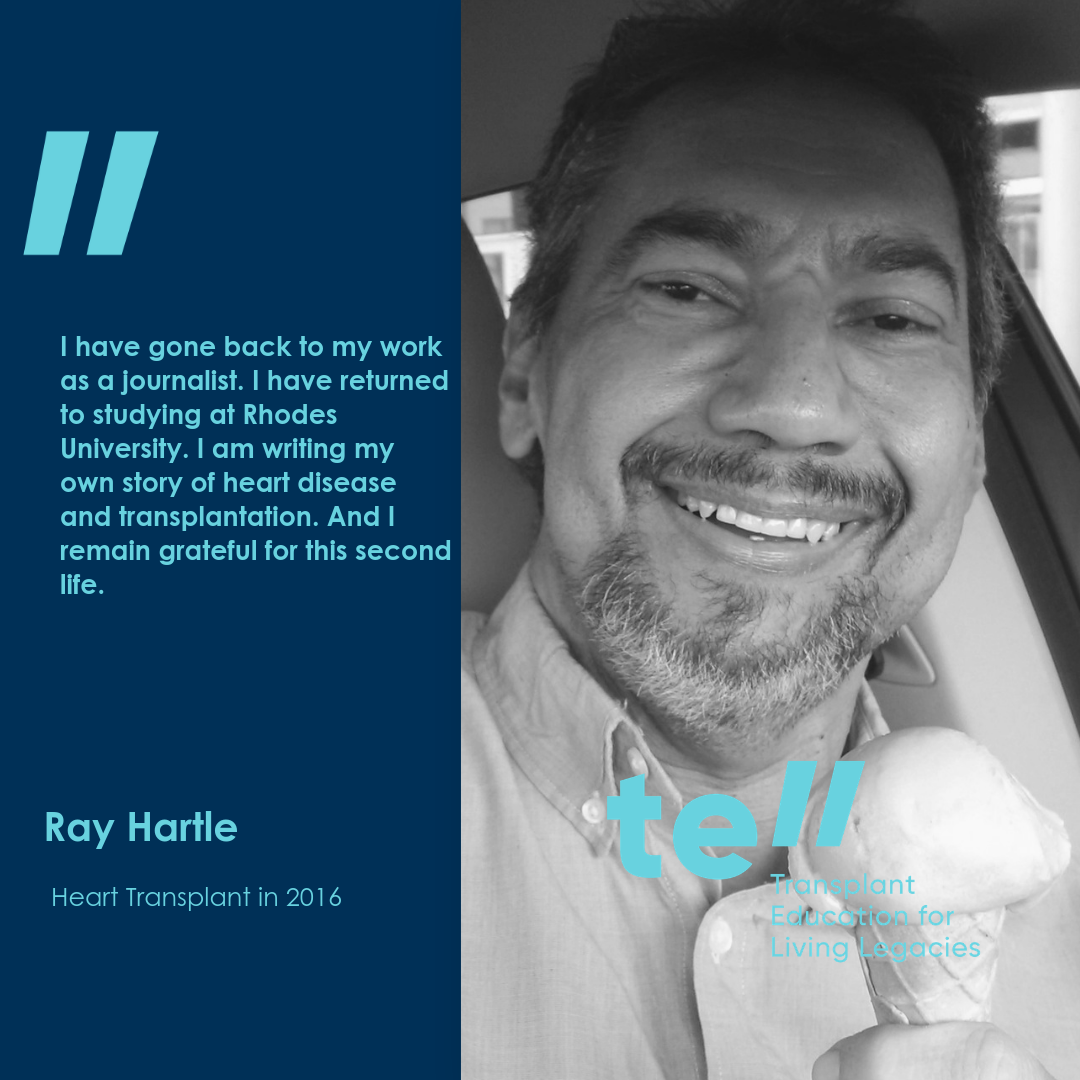 Organ Donation is a conversation, and we want to #TellYourStory. This week we feature the story of Ray Hartle, a journalist from the Eastern Cape.

1. Which organ/tissue did you receive, and in what year?
I received a donor heart in a transplantation in October 2016. I was admitted to hospital with end stage heart failure in August 2016, initially in East London and then in Cape Town. Even though I was in hospital for most of the period until I received a donor heart, it turns out that I was only on the official transplant list for only a couple of days and that included a weekend. The reason for this is that my medical aid approval came through on a Friday afternoon and the following Monday, a donor heart became available.

2. What was life like before the transplant? How did you spend your days?
I was diagnosed with cardiomyopathy in 2007 and, with good medication, I lived a reasonably normal life until about 2015 when I became seriously ill after travelling in North America. My condition deteriorated progressively – wet lung and water retention throughout my body, difficulty in breathing and increasingly incapable of the slightest physical exertion. I felt very old and wondered if this was how my quality of life would be and worsen as I got older.

3. Describe the emotions experienced when you received “The Call” for your transplant.
I got “the call” while in hospital. My surgeon and anaesthetist arrived at my bedside on a Monday afternoon and told me a donor heart had become available. I was gobsmacked and literally did not know how to respond. I was in a daze for most of the afternoon, trying to answer a multitude of questions via phone message from my loved ones. But I was grateful, immensely grateful for this gift from a donor and his or her family, thankful for the opportunity that I was being given, a bit apprehensive over what would happen although much had been explained to me in the weeks leading up to this moment. It was also strange because in some ways I had made peace with dying – I had been waiting to see whatever would develop. And this development was the best one I could wish for, but I never wished for it, I never consciously asked for a donor heart, I found it very difficult to see my ongoing life as the result of another’s sacrifice.

4. What is life like now, after the transplant?
My life has changed radically since the transplant. I have had some tough periods in the beginning, of building up strength, dealing with colds and flu since then, but mostly it has been an absolute miracle of new, better life. I have gone back to my work as a journalist. I have returned to studying at Rhodes University. I am writing my own story of heart disease and transplantation. And I remain grateful for this second life.

5. What advice would you give patients on the waiting list?
It is very easy to become despondent when one is very ill. But I know the importance of not giving up. One’s family and loved ones play a hugely important role in one’s journey, supporting, encouraging, fighting. Have people around you who will back you no matter what happens, loved ones whom you can trust in every situation. Try to keep as active as possible, mind, body and soul – don’t stop living, even though your body is failing. This approach will be important when you are taking the tough steps after the transplant to re-build your body.

6. Why do you think there is a shortage of donors in South Africa?
There are many reasons for donor shortages. Government policy is a big issue. Government must drive a national conversation about organ donation and transplantation. Government must ensure that a focus on primary health care does not simply disregard patients who require tertiary medical treatment like transplant procedures. We need an integrated system which draws together public and private transplant programmes and which sets in place one set of protocols which binds all parties.

7. If you could describe transplant in one word, what would it be?
The word that came to mind when I was told my heart transplantation procedure was scheduled, was SURREAL. It was also the word of the year for 2016, nominated by one of the world dictionaries. It remains the best way of describing this journey of illness, death and re-birth that I am on.

Varla King, 43 years old from Gqeberha is our feat

The entries for the fun walk scheduled for Saturda

We're heading into the time of year where we tend